Chester was born in Phoenix, Arizona, but moved to different cities in the state of Arizona. American Parents, and also he has three brothers. Went to Centennial High School and Greenway High School, and graduated in the Washington High School. During high school, Chester also worked as an actor, he believed that he was going to become a actor when he grow up. He started to practice his voice when he was 13. His first instrument was a piano. His biggest influence was his older brother, Brian, that used to listen ot Loveboy, Foreigner, Rush and Led Zeppelin. When Chester was young, he sang around the house, pretending to be the fifth member of Depeche Mode. Chester was a victim of child abuse when he was a kid, trying to run away from the reality, he started using drugs, but he went over it when he was 20 years old, for Chester, it was the most emotional moment of his life. When Chester married Samantha, he didn't have money to pay for the rings, his friend Sean had a tattoo store, and he tattooed for free a rings tattoo on Chester.

Without money to pay for college, Chester sneaked into the Philosophy classes, when the teachers found out, they kept letting him attend the classes because of his potential. Chester's first musical job was with the band Grey Daze, where he was the vocalist, the band recorded two records: Wake me and No Sun Today. A year after he left Grey Daze, on his 23rd Birthday he got a phone call from the executive producer from Zomba Music, Jeff Blue, inviting him to join Xero, on the next day they sent him a package with the demo with one instrumental song and some other tracks with the voice from the former singer, so Chester could be familiar with it and record his vocals. In three days Chester wrote the lyrics and melodies for a new song and he also sang old songs. They first heard the results by phone, and then they invited him to join Zomba Music in California. He was the last member to join the band Xero, which in the future would be called Hybrid Theory.

Soon as he got in Los Angeles, Chester didn't have anywhere to stay, he stayed months sleeping in couches at his friend's house. During the recording of the first CD, he slept in his car, parked in front of the studio. When the first employees started to arrive in the morning, Chester ran inside and kept sleeping on the recording room waiting the rest of the band to arrive.

In 1995, Chester and Sean Dowdell (founder of Grey Daze) created the Club Tattoo, which is a tattoo store in Phoenix, Arizona. Today the store is located in three locations in Arizona.

Chester was so poor, he didn't even had a bike to more around, he had a skate board and a box containing his personal objects.

Chester suffered from Laryngitis and bronchitis, but he got better in April 2004 when he got an Surgery. in 2005 Chester separated from his ex wife Samantha where he had a child called Draven Sebastian, in the same year he married his actual wife Talinda when he found out she was pregnant. With her, he had a child called Tyler Lee. Besides Draven and Tyler, Chester also has a 10 years old son called Jaime, which was adopted. In a recent interview, Chester said that he adopted Jaime's brother: "I have three sons, i adopted my older son, and his brother. I adopted him as my own son, so i think i have four kids".

Chester has 15 tattoos, he says that each tattoo has a meaning, in his arms he has the flames, which is his favorite tattoo, the inspiration of the flames coincide with the one in his shoulders (based on fishes and ocean creatures) it also represents his sign, Pisces, Chester was born in March 20. Chester's tattoos symbolize his two personalities: water and fire. There are 6 arms tattooed on his back, it was made by his friend who said that it was the visual representation of how Chester reaches out and grab the audience. on the bottom of his back has the name of the band tattooed in goth letters, he bet with Jeff if Linkin Park was Platinum, he was going to make that tattoo on his back. The tattoo was never finished. On his back also has two Chinese dragons, on his left leg has the soldier from Hybrid Theory (you can see him making the tattoo on the DVD Frat Party at the Pankake Festival. Chester was born on the year of the Dragon, that's the reason for the dragon tattooed on his right leg, he says that it is the same Samantha has on her butt. On his finger from the right hand he has a gold ring with a big rock on the top, he for it for birthday. On his finger on the left hand he has his wedding ring. On his left elbow has a skull with swords, on his chest has the initials TB and CB (Chester Bennington and Talinda Bennington with roses under) also he has another tattoo on his right elbow not identified. Before his success, he didn't like to go to the beach because people didn't like the tattoos, he didn't know what would happen, he needed to keep his job because he didn't have enough money. Now that he has money he does whatever he wants.

Chester says he understand that many fans need to go to shows so they can externalize the chaos they live on, he feels stronger when he sees all the fans jumping and having fun. Chester is the only band member that needs a kit of suit cases for his clothes and shoes, he has a different pair of shoes for each different pair of clothes, his underwear has to combine with his clothes, his socks has to combine with the shoes, etc... his outfit is really important for him, for him, everything has to be really organized.

Curiosities:-His most embarrassed moment was when he threw up on the fans from the front line in a concert

.-The most strange thing that a fan ever asked him was his clothes.-

The craziest thing he ever did was join the band.-His voice is different because it has two different sounds.

-Chester and Joe says that the lyrics from the song Everlong of Foo Fighters is the best on History. 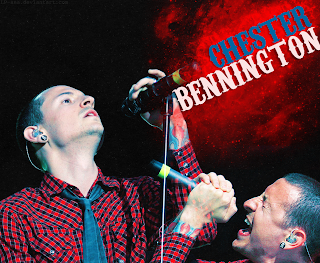